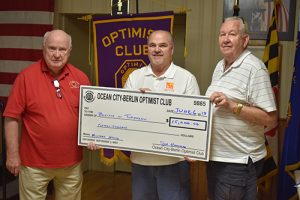 The Ocean City/Berlin Optimist club donated $15,000 to Believe in Tomorrow to complete renovations in the Military House on Bayshore Drive. The Military House is used to host families with ill children. The funds will be used to repair the outside deck, steps and fence as well as providing living room furniture. The club has... Read more »