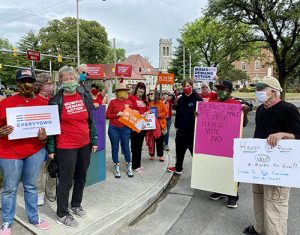 Community partners, including members of the Maryland Moms Demand Action Eastern Shore local group, rallied outside the Salisbury Government Office Building on June 16 when a vote for the Second Amendment Preservation Resolution for Wicomico County was scheduled. While County Sheriff Mike Lewis withdrew the resolution from the agenda, gun safety advocates say they will... Read more »