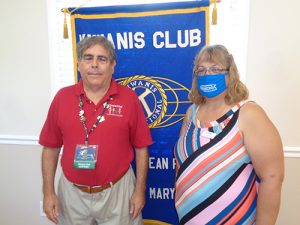 Diakonia, a local temporary shelter located at 12747 Old Bridge Road in West Ocean City, was featured during a recent community meeting of the Kiwanis Club of Greater Ocean Pines-Ocean City. Above, Diakonia Executive Director Bee Miller is pictured with Club President Steve Cohen after she spoke to the club about what Diakonia is and... Read more »