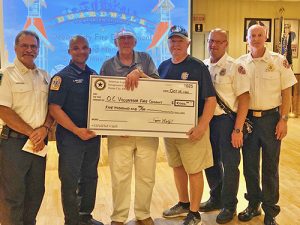 American Legion Post 166 has continued its program of supporting the local community with a contribution of $5,000 to the Ocean City Volunteer Fire Department in October. The donation represented a portion of the $21,000 disbursed to nine charitable civic and veterans organizations. Above, Post Treasurer George Barstis and Post Legionnaire of the Year Bob... Read more »